Welcome to Vang Vieng — a riverside town in Central Laos.

Once little more than a bus stop on the long journey between Vientiane at the Thai border and the World Heritage Site of Luang Prabang, Vang Vieng has managed to become a destination in its own right – and rightfully so. While the town still isn’t much more than three streets and a bus station, it is the stunning scenery of river and rock formations surrounding this place that will keep you dreaming of Laos long after you’ve settled back into real life. If you aren’t into the rowdy party scene that seems to dominate this town’s image, try to come in the off-season (Apr–Jun, Sep-Oct) and you’ll have this place almost entirely to yourself.

Many who have traveled around South East Asia have heard about tubing on the Nam Song River, an activity that long-dominated the town and its visitors. Originally, the bars catering to tubers along the river were opened up by hedonistic backpackers. At one time, as many as 20 bars lined the river, with pulsating music, drinking games and drug-fueled debauchery becoming the norm. However, after 27 tourists died while partying on the river in 2011, the local authorities cramped down on drugs, shut down many of the tubing bars, put restrictions on the volume of bar’s music, and removed riverside swings and “death slides.” As of July 2015, five bars operate each day along the river on a two day rotation. As of December 2015, only one bar operating.

However, those upstream bars still have a profound influence on the town itself, which has an atmosphere of lethargy by day and debauchery by night. In town, tourists sprawl out in the pillow-filled restaurants called “TV Bars,” watching re-runs of US sitcoms “Friends” and “Family Guy” until the sun goes down, and then party heavily until the early hours. Free alcohol is served at many of the tourist-oriented bars in town, providing hours of free drinking for the frugal backpacker. 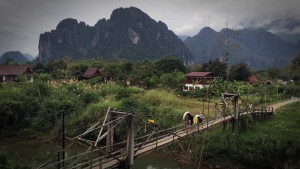 Welcome to Vang Vieng — a riverside town in Central Laos.