Chiang Khong is a fast-growing town in Chiang Rai Province, Northern Thailand. It is mainly visited as a stop-off point en-route to Lao, and is the Thai counterpart to the Lao border town of Huay Xai, just across the Mekong.

In mid-December 2013 a new bridge (the fourth Thai-Lao friendship bridge) was opened across the Mekong linking Chiang Khong to Huay Xai (aka Ban Houayxay) in the Lao province of Bokeo, replacing the previous ferry crossing.

Following the opening of this bridge a new bus route has started running from Chiang Rai through Chiang Khong to Bokeo. Chiang Khong to Bo Keo via the bridge takes around four hours and costs 130 Baht/7500 kip. The highway (and buses) continues to Luang Namtha and to the Chinese border at the Boten-Mohan checkpoint.

Each month more and more cafe’s, bars and restaurants are opening. They are all within walking distance of each other, in the village center.

The village was more recently made famous by British cyclist Alan Bate, who broke the Guinness World Record for the fastest circumnavigation of the Earth by bicycle in 2010. In the village he has opened the “The Hub pub”,the free to enter,”Hub bicycle museum”,and the “Funky Box Hostel”. All situated in Soi 2.

The interesting thing to note about Chiang Khong is ethnic diversity of the local Laotian, Thai and Hill tribes, which results in three separate calenders and a variety of festivals held throughout the year.

The best time to visit is from October through to the Thai New year festival of Song Kran in April.

Most reviews are now totally out of date, so come and spend a day or two in Chiang Khong and be suprised! 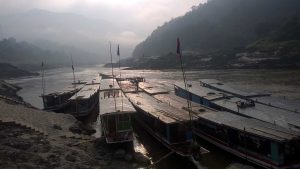 Chiang Khong is a fast-growing town in Chiang Rai Province, Northern Thailand. It is mainly…