The Hua Phan region, bordering Vietnam, is one of the remotest areas of Laos. The roads leading there are long and windy (but paved) as you ascend into the mountains. It is one of the most ethnically diverse provinces in Laos .

At first glance the town itself has little to offer a tourist, however, the surrounding area has some of the best mountain scenery in Laos, and if you’re willing to brave the roads on a motorbike you will not be disappointed. The surrounding mountains have waterfalls, hot springs and many scattered minority villages. Despite their stern exterior and confusion upon seeing foreigners the local villagers are very friendly and a polite ‘Sabai dee!’, and a wave will elicit a warm response.

Also of note are the communist monuments in Sam Neua and Vieng Xai which were the strongholds of the Pathet Lao during the American bombing campaign. 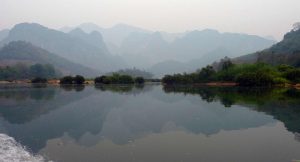